Academies are an interesting and well-known part of Nease, but to most anyone who isn’t in the academies themselves, their inner workings may be a mystery. I talked to various teachers and students to review their academy’s productions, projects and events, along with their day to day challenges and individual roles.

Mr. Cooler, a communications academy teacher, stated in our interview that, “he serves as an executive producer,” and that his program teaches real life responsibility, explaining that, “if you start working at an internship you’re in charge of your equipment. Someone else is not going to make sure that everything is in perfect working order.” He also told me how one of his biggest struggles is his students’ apathy, he noted, “some days students are full of creativity, and some days they only want to sit on their phones and play Among Us.”

Luke Baker, a 10th grader in Sports Media, illustrated daily life within his academy saying his main roles were, “filming and editing footage for sports highlights.” When asked about his difficulties in the academy he explained, “finding cataloged clips can be hard and certain tasks in Premier Pro can be complicated.”

Captain LaRochelle, a NJROTC instructor, explained that the academy teaches, “discipline, teamwork, time management, attention to detail, truthfulness, accountability, and responsibility.” He illustrated that so much of what they do is hands on leadership, whether it be, “conducting community service projects such as beach cleanups or organizing a formal awards ceremony.” The Captain also elaborated on the various competitions ROTC has competed in this year, such as an orienteering competition and a drone competition. Nease won 1st place in both.

Preston Rampey, a sophomore at Nease, explained daily life within the NJROTC academy claiming that, “class consists of drills, personal inspection, and academics.” He also explained the academy “teaches you discipline, respect, and time management,” but it isn’t for everyone and, while he does recommend it, you should, “give it a year.” Preston claims, “it’s been a great experience,” and that he is glad he joined ROTC.

Eli Evans, a junior in IB, explained that it is a, “rigorous academy full of brilliant minds,” and you need to put all your time into IB, saying, “I put my entire school life into IB, it’s full time.” Eli stated he enjoys IB for the, “class experience,” and his, “EE,” a research paper he gets to write in the academy. Alexis Vasquez, a 10th grader in the IB academy, illustrated what the IB academy is all about. She claimed that she joined for, “the challenge,” and it, “looks good on college applications.” While she claims she would recommend the academy, she stated that it, “takes hard work,” but is overall a good experience.

Ava Grzymkowski, a 10th Grader in Hospitality, stated that the academy is, “mainly studying business outside of hospitality and restaurants,” She also explained, “learning different rules and how the hospitality industry works,” is a difficult part of the academy. The extra time you need to put into hospitality is manageable, “being usually no more than two hours,” explained Ava. Lizzi Buttler, a sophomore in the Hospitality academy, explained that the Hospitality academy, “teaches students how to run a business and about customer service.” She also said she joined to come to Nease without being zoned.

Anakin Pillay, a sophomore in Engineering, said the academy was half note taking and half AutoCAD or Inventor depending on your grade. He also stated, “AutoCAD is used for making blueprints, and Inventor is for 3D parts.” The engineering academy recently finished a project making basic automata; machines that perform simple functions based on an instruction, like the turn of a crank. Ethan Barron, a freshman in the Engineering academy, explained the academy is about, “preparing students to get a job in the engineering field.” He also stated that the academy, “takes trips for engineering competitions,” where they submit a specific design based on a certain topic. He would recommend this academy to others, claiming, “you get to work on creative projects, and you are able to get certified in AutoCAD.” 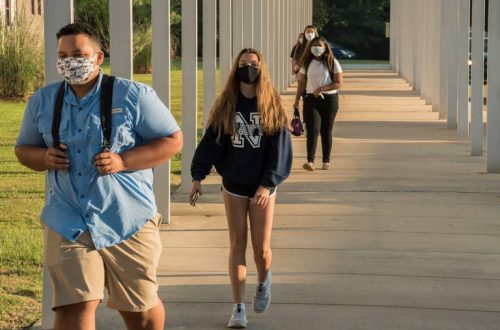